On August 2nd, Mike Hubbard, of Hubbard Heating and Cooling, installed our ductless minisplit AKA air source heat pump. This unit will serve as our primary heat source for the house. It works much like an air conditioner or refrigerator. All three use what is called the refrigeration cycle to remove heat from one location and put it in another. In short, there is a copper loop that carries a refrigerant fluid (formerly freon, now R410A) that has a really low boiling point in it. Along this loop is a pump (compressor) that circulates the refrigerant. Also in the loop is a choke point or expansion valve that causes the fluid to expand once it passes through. When a gas/fluid expands it becomes cold (think using a spray paint or aerosol can). Put a radiator on the pipe after the expansion valve, blow a fan over it, and you can effectively extract the cold off of the pipe. This part of the refrigeration cycle is called the evaporator. The fluid continues on back to the compressor, which re-pressurizes the fluid causing it to boil and heat up. Have a radiator and a fan at this point in the cycle and you have effectively extracted heat from the condenser side of the refrigeration cycle. One of the nice things about ductless minisplits is that they can both provide heat and air conditioning.

A good good diagram showing the refrigeration cycle can be found at Wikipedia: http://en.wikipedia.org/wiki/File:Heatpump.svg

The most common question is: “But it is, like, 10 degrees outside, how can you extract heat from that?!”

This is fine. It only feels cold. A penguin might think 10 is balmy. Also, keep in mind your freezer is tasked with removing heat out of 20 degree air. That heat is then transferred into your kitchen. As long as molecules are moving there is what we call “heat”. Negative 457 degrees F or zero degrees Kelvin is when there is technically no heat–a far cry from 10 degrees F.

The heat pump we purchased, a Mitsubishi MSZ-FE12NA, operates fine at temperatures down around -5 degrees Fahrenheit. 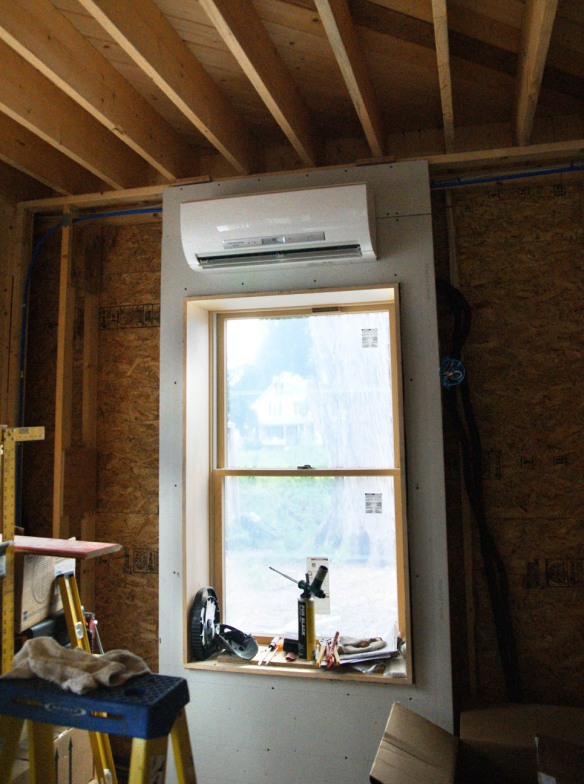 This is the indoor unit for the heat pump. We were originally going to mount in under the window, but I had no idea that it was going to stick on nearly a foot into the room. You can see the refrigerant lines to the right of the sheet rock. 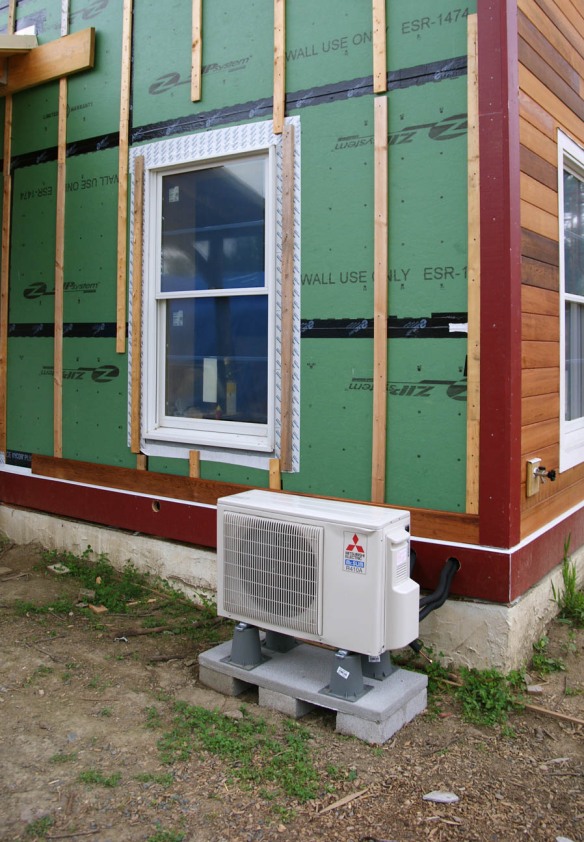 The compressor part of the Mitsubishi minisplit. This is lower to the ground than I would have liked. We will need to make sure snow doesn't build up around it. Eventually I will build a little roof over it. It is stood off from the house by about a foot and half so the fan can properly blow the cold or heat off of the radiator.

If you are from New England, or other cooler locations of the world, you might be asking “Why haven’t I heard about this technology?” The reason for this is, generally, these units only put out around a quarter of the heat a typical New England house would need. Of course, with our double stud walls, and plenty of foundation and roof insulation we only need about a quarter of the heat of a typical house.

Another frequent question is “How will the upstairs be heated if the heat is only coming from one spot on the first floor?”
I agree this is a concern, but my understanding is that the heat will distribute itself through the house faster than it can escape through our super-insulated shell. To assist in the distribution we have an open floor plan on the first floor, as well as an over-sized stairwell opening. All this being said, I still have some concern around the upstairs and third floor room being cool, which is why I had Hubbard Heating and Cooling install a second refrigerant line-set that goes to the master bedroom. This way, if it ends up being to cool upstairs, all we have to do us plug in an additional air source heat pump.

Mike Hubbard can be reached at 413-498-2970, he operates out of Northfield Massachusetts