We are slowly but surely making progress towards back filling.

On Monday Devin, my good friend who I learned timber framing from, came to help parge (stucco) the exterior of the house foundation stem (frost) wall. Unfortunately, I wasn’t able to get the material we wanted in time: surface bond cement. Surface bond cement has chopped fiberglass in it and is water resistant; ordinarily it is used for parging the exterior surfaces of dry stack cinder block walls. Devin and I decided to make our own mix from what was available at Home Depot. We mixed masonry cement with fine and coarse sand, water and an acrylic bonding agent. It barely worked. The sand was much too gritty and it stuck to the trowel just as much as the rigid foam board concrete surface. That being said, we did make some good progress: we acid washed the foundation, applied lathe to the corners (so the parging would stick at this challenging location), and we parged about a sixth of what needed to be done.

On Tuesday I was able to get the appropriate parging material from Shanahan’s Construction Supply in Turner’s Falls. It wasn’t cheap though: $33/50# bag. Due to the cost, I decided we would only use the surface bond cement where we needed to: the seams and corners where the foam is exposed. By code, this serves as our termite barrier. If we had covered the entire surface, then the parging would act as the necessary damp/water-proofing surface, however, I decided it would be cheaper to apply UGL Drylok or a similar paintable compound. It was such a relief to apply the surface bond cement compared to the mix that Devin and I created. It went right on without any difficulty. Thom and I were able to finish the rest of the parging in time for lunch.

While I was at Shanahan’s I asked them if there was a product that would help level out the top of my stem wall, which has as much as an inch of height variation. They recommended Silpro Masco.

Tuesday afternoon, Wednesday, and Thursday was spent working on assembling the stem wall forms for the garage. John S. worked Wednesday morning, Thom the afternoon shift. Thursday Thom spent the whole day helping. By the end of Thursday we are 7/8ths done. Even though we are reusing forms from the house, we are being much more careful about the strength of the forms. All of the threaded rod connections now go through the frames of the forms as opposed to the plywood. A number of the forms got a second layer of plywood. In general, there are much more bolted connections.

I expect we will be ready for a pour early next week.

After the pour we strip the forms and we will finally be ready to back fill–which means no more ugly piles of dirt sitting on the property! After the back filling we pour the slabs. Since I now have an appreciation for how difficult it is to level concrete I figured I would hire out the slab finishing. So far, I have a quote for $900 labor to finish the garage and house slab.

Devin working on putting lathe on the corners of the foundation. We pinned the lathe on by drilling through the cement coat on the existing foam, then sticking roofing nails (which have a very large head) in. 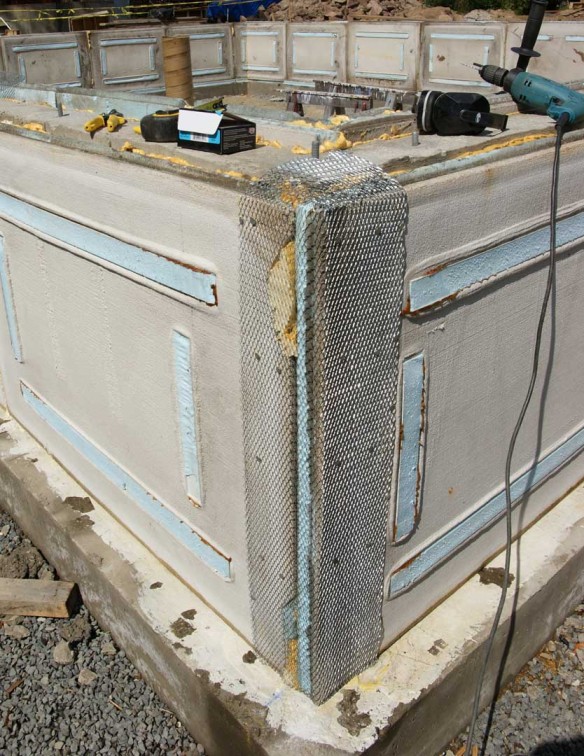 Lathe on the corner of the foundation. 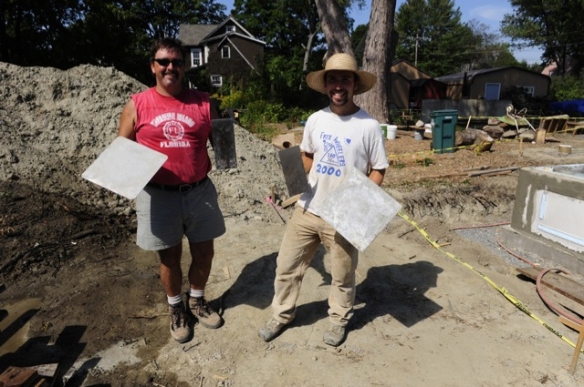 Spartan and Thom with hawks and trowels. (Photo by Beth) 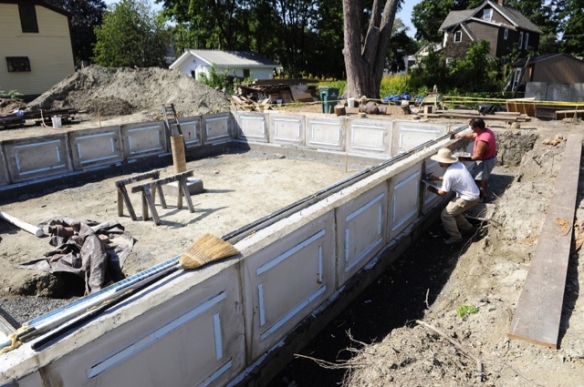 Spartan and Thom parging the foundation. (Photo by Beth) 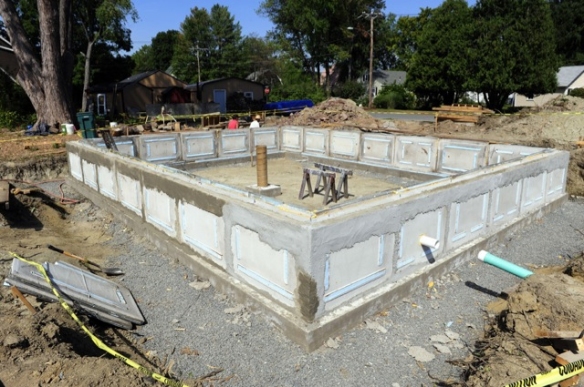 You can see the contrast between yesterday's and today's parging. The newer parging is darker. (Photo by Beth) 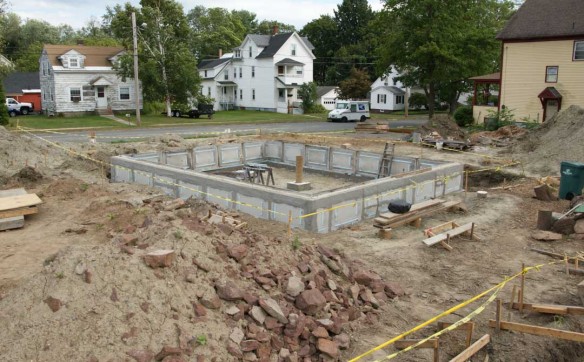 The parging is done. Even though it looks like we missed a lot of blue foam stripes, they actually have cement behind them. 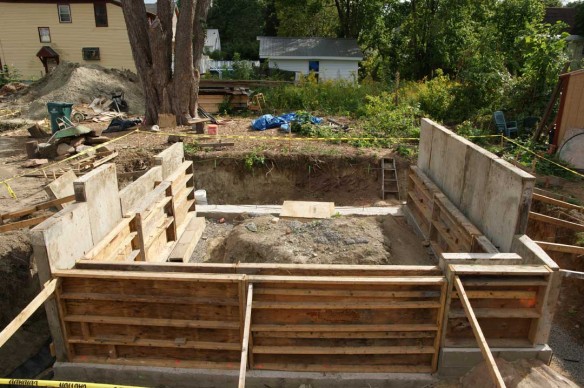 The garage form walls at the end of Wednesday the 8th